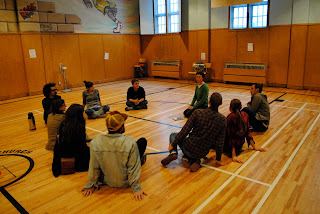 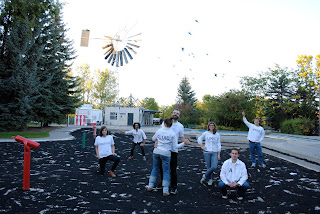 The first photograph is the quick information workshop for the Local Library group before heading to the sight of the final performance in Barclay Mall.

The second shot is one of many taken during the performance in Barclay Mall.

Belmont has different techniques for arriving at a phrase for each performance. The phrase for the first and second performances came from workshops. During the first workshop the participants brainstormed and wrote their memories, news and historical knowledge of the Bow River on a map hand drawn by Belmont. The participants were also given index cards to complete many sentences provided by Belmont, from this information Belmont decided on the phrase for the first performance. Belmont took a larger part in pre-planning for the second performance; the workshop participants were given the start of only two sentences to complete. Cécile Belmont through her research and time spent in Calgary had the start of the phrase already chosen. The third and final phrase was taken from a newspaper clipping found by Belmont while doing her research.

The reception for Letter Performance will be Monday, September 27, 2010 in Olympic Plaza from noon to 5:00pm. There will be large posters produced from each performance available at the reception.
Posted by TRUCK Gallery at 11:57 AM No comments: 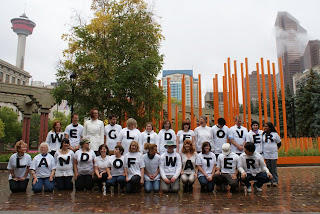 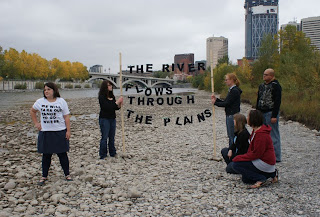 Cécile Belmont (Berlin, Germany) has been working with various people and groups in Calgary conducting performances. A "Letter Performance" involves a group of people meeting in a public place to perform a predetermined act of messaging or communication. The Performances provoke a reaction and bring people together to create a ‘buzz’. Final performance is Wednesday, September 22, 2010 in Barclay Mall at 6:30pm.

The first image above is from the first performance on September 16th, the participants included a group from the Alberta College of Art + Design, City staff from the Water Centre, and construction workers.

The second image is from the second performance on September 18th in Prince's Island Park. The participants for this performance consist of TRUCK members and friends.

These performances explore how we experience and react in public space.

Reception: Monday, September 27, 2010 in Olympic Plaza from noon to 5pm.
Posted by TRUCK Gallery at 2:18 PM No comments: