La Chambre, (French for The Room), is the title of Jacinthe Lessard’s exhibit of sculptures and photographs at TRUCK.  The title for this exhibition references the interior of a camera, the chamber where photographic images form themselves both conceptually and physically. In his seminal text on photography, The Camera Lucida, French theorist Roland Barthes refers to the photographer as a “mediator, who makes permanent the truth” (1). Working with this idea of permanence, Lessard captures the negative spaces of a series of cameras, creating physical casts of their interiors. Her intention in doing so is to transform the negative spaces that exist within these cameras into physical objects. To accomplish this, she pours liquid silicone into their interiors in order to create molds. Once hardened, she removes each mold and photographically documents the differences in shape and form that emerge from one camera to the next.


With these works, Lessard’s intention is to create an homage to an important space that, she says, is shrinking over time due to developments in technology. She is interested in the changes in approach to image making that have resulted, because conceptually — and despite the physical presence of such technical components as semi-conductors, sensors, computer circuitry, and signal processing boards within digital cameras — the chamber within is still the space where a photographic image is initially formed.


The formal aspects of these works are important to Lessard, as are their architectural characteristics. Indeed, her sculptures contain features that are strongly suggestive of architectural structures as diverse from each other as towers, ziggurats, and industrial buildings. As part of her process, she hopes that the viewer will wonder about where the sculptures have originated and question what they are meant to represent. As a result, the viewer is left to add his or her own visual references to these works. In La Chambre, she has chosen not to show most of the sculptures directly, instead, photographing them in order to suggest that their scale is ambiguous. Lessard shows only one of the casts in the exhibition — the interior of an 8” x 10” Bellow camera. She does this to remind the viewer that although the photographed sculptures are represented as two dimensional images on the walls of the gallery space, they also have a very real presence in the physical world as three dimensional objects. 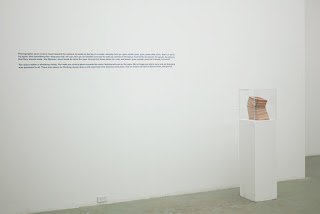 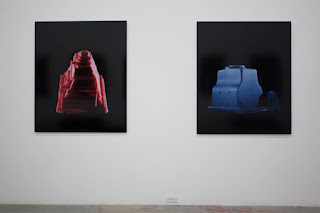 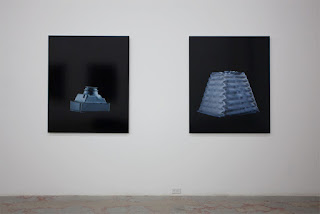 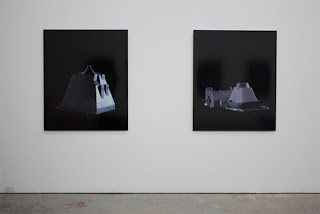 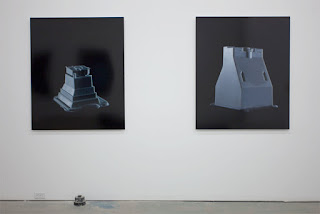 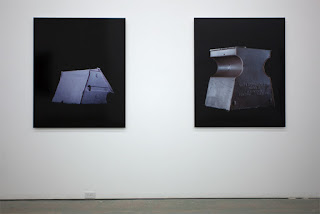 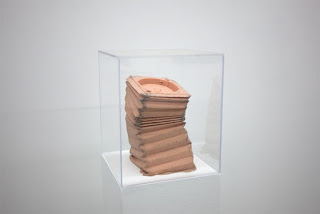 Posted by TRUCK Gallery at 3:08 PM No comments: